In 2009, Vicki Van Hout invited Imogen to collaborate with her as the New Media Artist for her dance work in development, Briwyant.  Following a successful creative development with Performance Space in 2010, Van Hout was invited to present Briwyant as part of the 2011 Performance Space season, Uneasy Futures.

The Dreaming Festival 2011/12 in Woodford was the next stop for the show, featured in the BLAK dramatics venue as a pared back performance of the work.

Later in 2012, Briwyant went on national tour to Melbourne for a season in the Malthouse Theatre followed by a run in Brisbane Powerhouse and finally Darwin Festival.

Briwyant was nominated for the Australian Dance Award, 'Outstanding Achievement in Independent Dance' and Van Hout was invited to present an excerpt of her work as part of the awards ceremony. 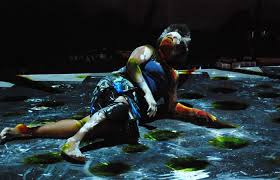